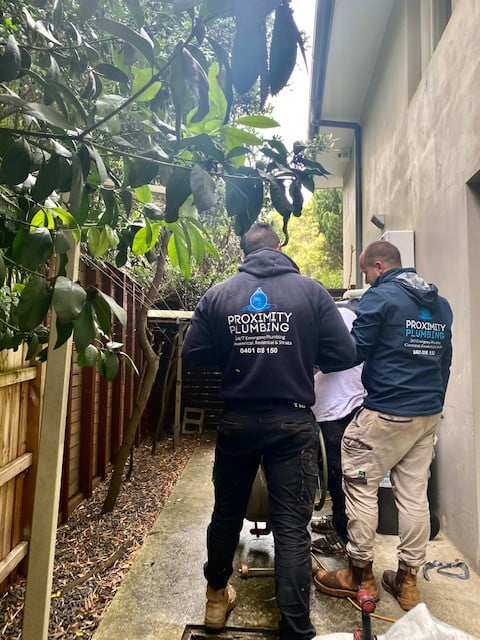 Proximity plumbing was tasked with providing a pipe relining solution for an elderly couple based within Sydney’s oldest suburb “The Rocks”. Due to the age of the building and the location of the drainage simply excavating the area and re-plumbing with PVC wasn’t a viable option. In this particular Sydney home, the drainage ran through the centre of the house and continued under the footpath and terminated under the street.

The clients had lived there for over 30 years and wanted a permanent solution as they were sick of getting a plumber in every 12 months to high-pressure jet their blocked drains. Fortunately, the client briefed us over the phone and explained this wouldn’t be a straightforward trenchless inversion job and that many other plumbers had said the job couldn’t be done successfully. Other Sydney pipe reliners had voiced their concerns with the level of complexity the amount of damage on the existing earthenware pipe and the consequences of an unsuccessful job.

As we are always up for a challenge we were delighted to go and provide a $0 complimentary Sydney relining solution and see what was possible. With over 25 years of collective experience, we like to think we are Sydney’s #1 Pipe Relining experts.

After being successfully rewarded the job we managed to start straight away and start the first process which involves setting up high pressure jetting equipment and cleaning the existing line where applicable. This followed by existentially mapping out the entire sewer drainage system and surveying each section of the line and all the lineal meters involved in the trenchless pipe relining project.

We then came up with an action plan which involved two different pipe relining processes, the first is what’s called “ pipe patching, Pipe patching, also known as sectional pipe repair, is an alternative to traditional pipe repair methods. It’s an ideal solution for smaller damaged sections in your piping.

For small to medium pipe relining, we use the Brawoliner Inversion Pipe Relining system. This is an ideal system for most domestic and commercial drain and sewer relining as it will handle multiple bends and small changes in pipe diameter. We chose to work with  the team P24 Relining | Sydney’s #1 Pipe Relining Experts.

They have the experience, equipment, and expertise to complete the complex shot which involved a boundary trap, 2x square junctions and a transition from 4inch to 6inch over 18 meters. They were also able to guarantee completing the entire shot in one go without the need to excavate on the

Fortunately, everything went to plan and thanks to all the preparation there were no hiccups just a lot of stress during the curing time. On completion, we managed to send through our CCTV camera and inspect the line and confirm a successful relining shot. We provided the footage to our clients who were delighted with the result and even more knowing they have 35 years warranty on the product and a lifetime workmanship warranty as standard.

We look forward to returning every year to inspect our work as standard with all our pipe relining solutions Sydney wide. If you would like to know more about our Sydney relining company please get in contact.